(West Haven, Connecticut) – Democrats for Life of America (DFLA) congratulates Connecticut Representative Treneé McGee for winning her primary election for the 116th House District seat on Tuesday night.
“Representative McGee is a fierce pro-life Democrat who is leaving her mark in Connecticut and beyond,” said Kristen Day, Executive Director of DFLA. “Representative McGee embodies and exemplifies Whole Life leadership in her community. She fights for all people, especially people of color, from the womb to the tomb,” Day continued. “As a Representative for the Connecticut House, Ms. McGee addresses inequalities and inequities and provides support to the vulnerable in her state.”
Representative McGee was recently awarded DFLA’s Whole Life Leadership Award. The award is given in honor of the late Bob Casey Sr., who was Governor of Pennsylvania and a notable pro-life Democrat.
“We do not award this honor every year,” remarked Day. “We only bestow this honor when we see someone standing up for their beliefs and Whole Life principles with dignity and courage.”
In April, Representative McGee stood in front of her fellow Represenatives and delivered a powerful testimony against HB 5414, a bill which would loosen abortion regulations and liability measures. Although the bill unfortunately passed, Representative McGee emboldened 14 other Democrats in the House and three Democrats in the Senate to vote against the measure.
“I am honored to receive this award and have immense admiration and appreciation for DFLA and Governor Casey’s legacy,” commented Representative McGee. “Being not just pro-life, but Whole Life, is incredibly important and essential. Life must be respected and protected at every stage,” she remarked. “Since Roe v. Wade has been overturned, there is a great need to understand and eliminate the barriers, particularly poverty, that women, especially Black women, experience. We are over-represented in abortion data and statistics. As a Black woman, it’s time to give women in underserved communities of color the same opportunities afforded to those in more affluent communities.”
“We are confident in Representative McGee’s commitment to building social safety nets for the people of Connecticut,” added Monica Sparks, President of DFLA and a Kent County Commissioner in Michigan. “Her voice and her values are instrumental in a post-Roe America. Leaders like Representative McGee have a big impact, and she will doubtless continue to inspire her fellow Democrats and those in her community.”
DFLA is excited to continue working with Representative McGee, and we stand ready to work with all leaders at all levels to make sure that every person, inside and outside of the womb, is protected and respected. 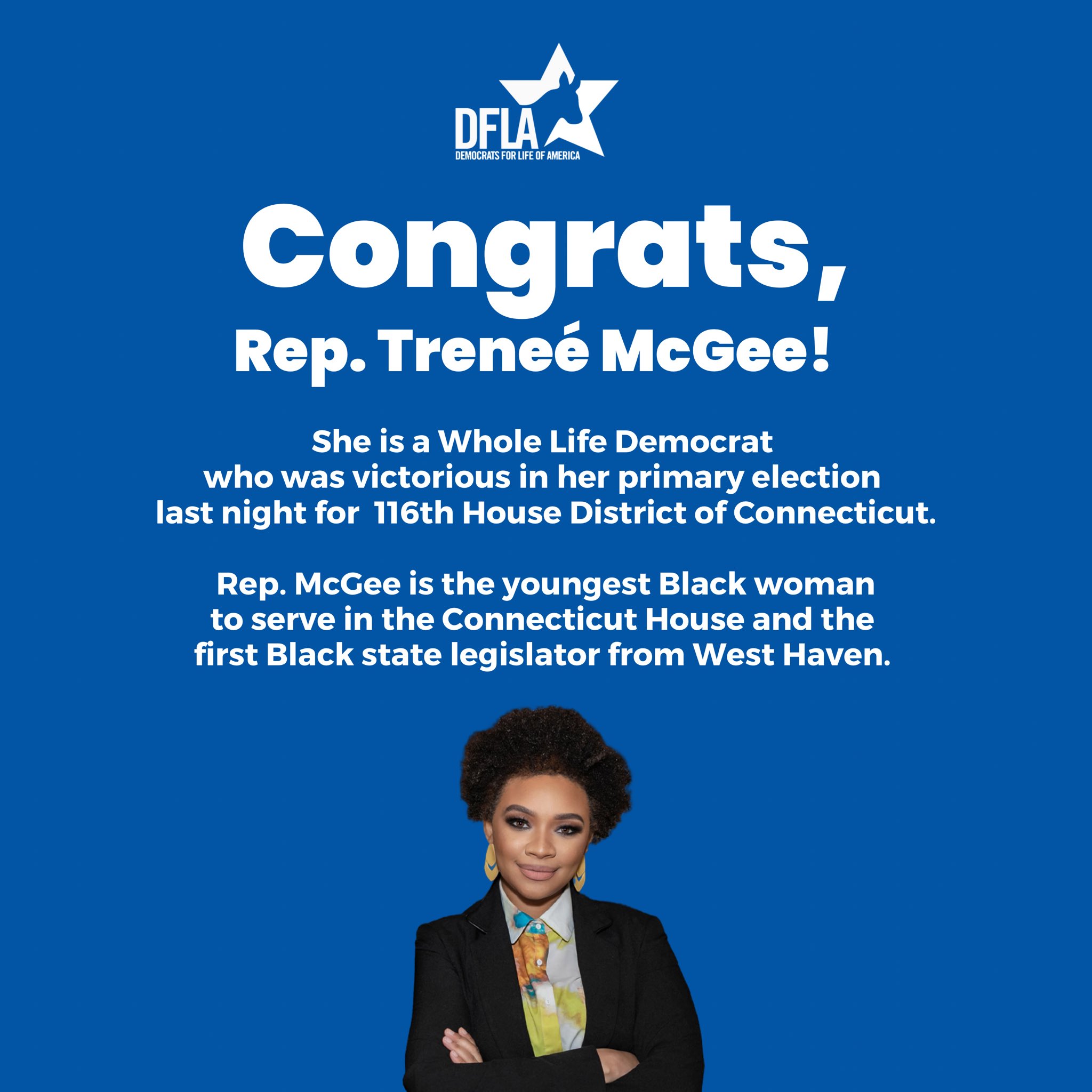